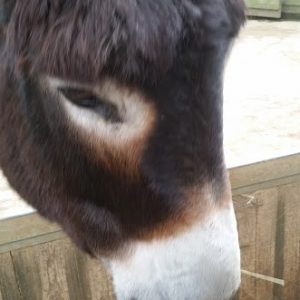 A couple of years ago, a friend and I took a 10-day trip to Italy and Switzerland. When planning the trip and what we would see and experience in the Piedmont region of Italy, I began searching for an animal sanctuary to visit. The miracles of Google led me to Il Rifugio Degli Asinelli – The Donkey Refuge.

To say that The Donkey Refuge is in the middle of nowhere would be an understatement. We rented a car one morning in Stresa on Lake Maggiore and Google Maps informed us that the trip would take approximately 1.5 hours. We climbed out of Stresa on a winding, switchback-filled road that began to make me rethink the drive. We finally made it to the autostrade after a harrowing 20 minutes, and I relaxed into the drive. The car was a Fiat Panda, barely large enough to hold our two suitcases. It was also a manual transmission, and it had been awhile since I last drove a stick. I managed to do well, only stalling once in two days, so I felt successful.

We exited the autostrade after about 40 minutes and continued our journey on country roads through the Piedmont. As we turned onto one such road, with no town in sight, we noticed a strange occurrence. There were single women stationed along the road, spaced intermittently about every 100 feet. At first we pondered whether they could be waiting for a bus, but that didn’t seem likely as they were on opposing sides of the road. It finally occurred to us that the women were prostitutes, though we couldn’t imagine where they would actually ply their trade. They were literally surrounded by farmland. Stunned, we continued on, driving through picturesque towns with roads barely wide enough for one car, no less two. I became adept at pulling to the side for oncoming “traffic” and really began to enjoy the trip.

Finally, we pulled into The Donkey Refuge. It is located at Via per Zubiena 62, Sala Biellese, in the shadows of the Pre-Alps. I went into the gift shop and spoke with Hillaria (forgive me if it is misspelled). She was friendly and informative and I learned about the refuge and the donkeys. They do allow you to visit the donkeys, but you have to stay on your side of the fence!

Il Rifugio Degli Asinelli was founded in 2006 and is an offshoot of a U.K.-based charity that has been working on donkey welfare since 1969. The mission of the refuge is to provide care, protection, and permanent security for donkeys and mules which are in need of attention due to sickness, mistreatment, poor circumstances. They also strive to prevent cruelty and suffering among donkeys and mules in Italy.

The Donkey Refuge has five main activities to help them accomplish their mission:
• Provide care for donkeys and mules who are in need;
• A network of Welfare Officers who investigate public complaints of mistreatment or abuse;
• Education to promote donkey welfare practices;
• Donkey-assisted riding therapy program for children with special needs; and
• Fundraising to pay for the above.

Our self-guided tour of the refuge was wonderful. There are paths that lead up a hill toward the older donkeys and those with respiratory illnesses. There are also informational sheets near the donkeys’ paddocks, telling you a little about each donkey. The Donkey Refuge also houses mules, hinnies, ponies, and one horse, but they live together in harmony. I really liked that each animal had a loose collar with their name engraved, so you knew which donkey you were petting. The collars were color-coded so you would know which one were available for adoption or fostering. We concluded our tour with the younger donkeys who were free-ranging near the parking lot. All the donkeys we encountered appeared in good spirits and looked well-fed. Veterinarians were on hand, if necessary, and Il Rifugio Degli Asinelli would be a wonderful place at which any donkey would be happy to retire. I am grateful that sanctuaries and refuges exist to help care for the animals who suffer unnecessarily due to man’s inhumanity and cruelty.

How can you help Il Rifugio Degli Asinelli? Click on their name throughout this post. From their webpage, you can donate, adopt, sponsor, or foster one of the refuge’s residents. If you live locally, you might also want to consider volunteering. If you live anywhere in Italy and witness cruelty to donkeys or mules, you can report it on the site also and they will make sure the complaint gets investigated. There are a number of other actions with which you can get involved right from their home page.

My only complaint about The Donkey Refuge is that the gift shop did not accept credit cards. We were limited with our Euros, so only purchased a few small items. I will definitely add Il Rifugio Degli Asinelli to my end of year donation list though and hope you will, too!

Always remember, to use your voice to ensure that all animals are being treated humanely and without cruelty. Use your voice to speak for those who have none. I have a voice and I Speak for Paws (and feet and hooves and fins and…).

A Visit to Il Rifugio degli Asinelli in Italy