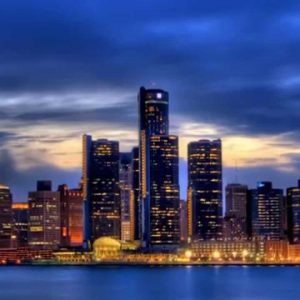 Detroit is the largest city in Michigan and is nicknamed the “Motor City” due to its ties to the auto industry. Detroit is also acknowledged as the birthplace of Motown Records. Detroit is a major port on the Detroit River and is home to unique museums, delightful water views, and distinctive restaurants. Explore unique art collections, relax on the waterfront, watch a major league baseball game, or get hands-on with science. Detroit allows visitors to enjoy an exceptional city with a rich, cultural history.

Discover Detroit and all of its delights.

Be prepared you to experience Detroit’s activities. Tour Comerica Park, home of the Detroit Tigers, and get a behind-the-scene look at the park’s popular attractions. Immerse yourself in river life with a riverboat tour or explore Detroit by land. Stroll, bike, or skate along the 3.5 mile, paved RiverWalk trail where you can also picnic, fish, and take in the breathtaking views of the Detroit River and city skyline. Activities in Detroit are full of history and nostalgia. Shop the treat-filled Eastern Market with fresh fruits, vegetables, and lively street musicians to provide the soundtrack to your day.

Take a tour of the Ford Piquette Avenue Plant is a National Historic Landmark and where Henry Ford first began assembling the Model T. Visit the Fox Theater – a National Historic Landmark that is listed on the National Register of Historic Places – that illustrates a number of extravagant architectural styles. Inspire and educate your family at the Michigan Science Center with interactive exhibits, a planetarium, and an IMAX theater. Reminisce with artifacts, memorabilia, and photos at the Motown Museum. Discover the Detroit Zoo which is home to over 3,300 animals and was the first zoo to feature bar-less exhibits.

Experience Detroit’s temperate climate and 4 well-defined seasons. The Detroit climate is greatly influenced by the Great Lakes. The condensation of water vapor from the Great Lakes causes frequent cloud coverage over Detroit. Winters are cold with moderate snowfall and summers are warm and sunny. Summers usually run from May to September and are a wonderful time of the year to appreciate the activities on and around the Detroit River. Winter’s chills will provide you time to appreciate the wide variety of museums in the cool winter months.

Detroit has the only international wildlife preserve in North America that is located in the heart of a major metropolitan area. The preserve includes islands, coastal wetlands, marshes, and shoals along 48 miles of the Detroit River. The city slopes gently on a plain composed of clay. Detroit geographical location is north of its sister-city, Windsor, Ontario, and it is the only city in the United States where you need to travel south to reach Canada. Both Detroit and Windsor sit atop the Detroit Moraine, a broad clay ridge which rises approximately 62 feet above the Detroit River.