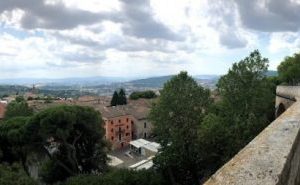 I really enjoyed the eastern and southeastern portions of Italy last summer. The views were gorgeous everywhere you looked (see Part I, Part II, and Part III of this series). However, I fell in love with Umbria. Perugia is one of my top three favorite towns in Italy now. I was absolutely stunned by the beauty lushness, and magnificence around every bend in the road.

Follow in my footsteps and experience virtually what I discovered.

From the first moment when I stepped off the train, I was enchanted by Perugia. It was a little overcast so I decided to take a taxi to my hotel. Good thing as the taxi immediately started to drive on the street that went straight up. Apparently, the train station is at the bottom of the mountain. I mentioned to the taxi driver that it was good I didn’t walk with my luggage and he heartily agreed.

There is a funicular to take you partway up and then a series of escalators built into the mountain to make navigating the city so much easier (with fewer steps to climb though those are available should you so desire). I stayed at the Hotel Sangallo Palace about halfway up the mountain. It was perfectly situated with the escalator a short walk away and I was able to hear the jazz music wafting down from the top of the mountain and up from below. Truly spectacular.

The walkway and stairs were part of a former Roman aqueduct. Walking down a narrow, medieval street, you would turn a corner and be presented with the most breathtaking view. The escalators were built into the mountain and you emerged in Etruscan ruins.

I was there coincidentally during Umbria Jazz. The sounds of music filled the streets and there were free concerts and performances everywhere. It was like having a classy soundtrack of my life.

The concerts were all sold out by the time I wandered into Perugia, so book ahead. Umbria Jazz is usually held in July, though I’m not sure what will happen this year. They get some pretty top-notch jazz musicians, too.

History and an Etruscan Well

The Etruscans were there before the Romans and provided clean, public water to their citizens. Below are remnants of an Etruscan well which is thought to have been dug in the second half of the third century BC (yes, that’s right. Before year 0!). It was later used by Romans and other inhabitants of the town.

I took a cooking class outside of Perugia. The cooking school is located in a farmhouse and we used many ingredients grown right on the farm, including their delicious wine and olive oil. It was absolutely amazing and I met and cooked with people from all over the world. The school is called Let’s Cook in Umbria and I highly recommend you sign up for a multi-day class I took the 5-day class and could have stayed longer. I left with recipes and memories that will last a lifetime.

After our cooking class and lunch – where we dined like royalty and drank wine made at the farm – we took some daytrips. Our first activity was to participate in a truffle hunt with a trained dog – and one in training. After, we attended a truffle tasting. I never thought I liked truffles before. I do now.

Another excursion took us on a tour of Assisi. It’s all uphill but the views were incredible and the history contained in the cathedral was awe-inspiring. Even if you’re not religious, you need to appreciate the craftsmanship and artistry that was put into these medieval churches and mountainous towns.

The Craftsmanship of Orvieto

Our final excursion from the cooking school was to Orvieto. Another superbly designed and crafted cathedral. The scale and scope are incredible and it’s hard to believe that the cathedral could have been built at a time with no cranes or power tools.

Until We Meet Again, Arrivaderci Perugia

If you ever have a chance to visit Perugia, run, don’t walk. I will definitely return time and time again.

Join me in Part V of my summer vacation when I go to Florence and take a tour of the Lake Region. Spoiler alert: I find my favorite lake!