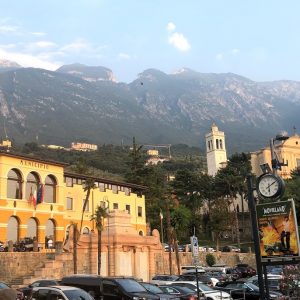 While waiting for a tour of the lake district to start, I spent a few days in Florence. It was still as hot as Hades but I walked through the city to experience the architecture and vibe of the city. Nothing can prepare you for the sheet size and vastness of the Cattedrale di Santa Maria del Fiore, translated as the Cathedral of Saint Mary of the Flower and more commonly known as the Cathedral of Florence or the Duomo di Firenze. (This is going to be a long post so if you want to know more about the Duomo di Firenze, please click here.

The Ponte Vecchio, or the Old Bridge, is stunning, crowded, overwhelming, and breathtaking all at once. This medieval stone bridge spans the Arno River and is lined with shops as bridges were in the past. Formerly butcher and baker shops, now shops catering to tourists, it is the oldest bridge in Florence and was the only bridge over the Arno until 1218. I doubt anything built today would last for 800+ years! To add some intrigue, the Vasari Corridor runs along the top of the bridge. This secret passageway connects the Palazzo Vecchio to the Palazzo Pitti (if you’ve read Dan Brown’s “Inferno,” you are in on the secret).

Have I mentioned how hot it was in Florence? I escaped to the Boboli Gardens and wandered around to enjoy the vistas of Florence. I also enjoyed some culture at the Uffizi Galery. I was hoping for some AC but at least the thick walls kept out a lot of the heat. The building was constructed between 1560 and 1580 and, once again, the architecture is nearly as stunning as the artwork. The Uffizi has one of the largest collections of Old Masters in the world. I saw Michelangelo, DaVinci, Titian, Rembrandt, Reubens, Van Dyck and too many more to mention.

I continued my day of culture at a performance of the Three Tenors of Florence. It was held at the Auditorium de Santo Stefano, a converted church, and was absolutely lovely. The music was accompanied by ballet dancers and the acoustics were phenomenal. Walking back to my hotel, it was a little creepy to see the streets so empty after having been so packed earlier in the day.

I joined a Trafalgar – Cost Savers tour as I was starting to feel a little lonely after four weeks alone. It was an 8-day tour of the lake region in the Lombardo region. I was very reluctant to try a tour. When I was in high school, my parents took my sister and me on one of those “If it’s Tuesday, it must be Belgium” tours. I was afraid that this tour would also be filled with complaining, elderly Americans who wanted everything just like they had it in the USA. I was very pleasantly surprised, however. I met people from all over including the UK, South Africa, and Australia. There were a few elderly people but there was a good age range from 30’s and up. I wasn’t the youngest – but I certainly wasn’t the oldest either so that made it better.

On the first day, we took a boat trip on Lake Como. I saw some beautiful scenery from the lake tour and then we wandered around Bellagio, commonly referred to as the pearl of the lake. I climbed to the top of the little town and then back down where I met up with a new friend from the tour and we each enjoyed a glass of wine at a cute little wine bar. After climbing down the second set of stairs, we thought we should try an Aperol Spritz which was made with Aperol liqueur and sparkling rosé wine. It was both delicious and refreshing!

We next traveled to Switzerland and Lake Lugano. The lake was refreshing and relaxing and I loved these paddle boats with a slide attached that were for rent to tourists.

In the town of Lugano, we took a funicular to the top of Mont San Salvatore. We enjoyed breathtaking views. Take a trip with me down the funicular in the following video – if you dare!

Our next adventure brought up back to Italy and Lake Stresa. I had visited Stresa two years previously on our way back from Zermatt to Milan and fell in love with it then. It is extremely picturesque but we were only there briefly so I didn’t get a chance to explore the islands in the lake or the Palazzo Borromee.

The Palazzo Borromee is still partially a private residence. The grottoes beneath the palace were so that the owners could walk around and cool off there on hot days. I was awe-struck by the gardens and I got my first glimpse of a white peacock – I never even knew they existed before!

The tour stopped in Orta which is a charming town with narrow, winding streets – and yes, more stairs!. It was the perfect place to relax with an Aperol Spritz – after all, you need to taste quite a few to determine who makes the best one! On the way out of town to our next stop, I tried a Caffé Shakerado which was adventurous for me because I don’t like, or ever drink, coffee. This was sweetened and shaken up with ice until it was extremely chilled. The best way I can explain it is that it tasted almost like a coffee milkshake. There was a lot more caffeine, however, and I felt the effects when we arrived in Verona.

The first photo above is “Juliet’s Balcony” – not really because “Romeo & Juliet” is a work of fiction. It’s in a tiny courtyard that you access through a passage that people have attached written notes with used chewing gum. It was rather revolting to see, despite the sentiment. The second photo is what I really thought the good people of Verona had erected as the “actual” balcony as it was much prettier. Verona had its own coliseum, however, most of the town seemed dedicated to shopping and tourism. I definitely could have skipped this portion of the tour.

Next we came to my favorite lake – Lake Garda. It is the largest lake in Italy and it felt so incredibly calming and awesome. From watching the paragliders to the boat ride around the lake, it was absolutely stupendous. Lake Garda is surrounded by mountains and enjoys a micro-climate in the north that allows them to grow both lemons and olives. I thoroughly enjoyed the town of Limone, the colorful flowers, and the ingenious way that there are two roads around one portion of the lake – one for pedestrians/cyclists and the other for automotive traffic. This is the second place (Perugia was the first) where I felt I could live.

If you are going to experience the Dolomites, take the cable cars in Bolzano, Italy. The area used to be part of Austria so there is still a lot of German spoken in these parts. We hiked in the 100+ degree heat and viewed some intriguing rock formations. One of the local restaurants provided some delicious – and free – apfel strudel and local wine. I had a brief Sound of Music moment which was wonderful.

Nearing the end of the tour, we stopped in Bergamo. We took another funicular up the mountain through the town. We had a few hours to wander around and I delighted in the charming town that had fantastic pizza.

The last day of the tour took us to Milan. When I went when I was younger, I did not like Milan at all. I have grown to really appreciate the thriving city. From the unassuming Teatro all Scala – I vow to see an opera there someday – through the famous galleries and to the Duomo, Milan is a marvel and I feel myself becoming more and more comfortable there every time I visit.

I’m nearing the end of my six-week journey. Next week will be the last installment in this photographic journey through Italy from the summer of 2019. I packed a lot in, driving myself (Yikes!) from Milan to Modena to Siena and finishing in Rome. I will be back and I wish everyone in Italy – and around the world – a safe and speedy recovery from this global pandemic. It’s scary out there but there is a lot of beauty to enjoy and adventure to experience. Arrivaderci, Italia!