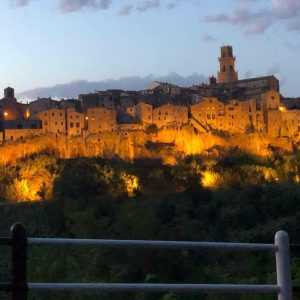 This is my final installment on my series about my trip to Italy in the summer of 2019. I spent six incredible weeks traveling the depth and breadth of Italy. Each region and town I visited was spectacular. The sights were amazing and steeped in history. Join me on the last nine days of my trip as I leave Milan for Modena to Siena and Pitigliano and finally down part of the Mediterranean coast to Rome. I wasn’t planning on going back to Italy this year but even six weeks were not enough time to fully explore this beautiful country.

I picked up my Fiat at the Milan airport and headed to Modena, home of everything balsamic vinegar. The car was an experience unto itself. I rented a manual shift car because it was less expensive. While I am experienced with manual shift vehicles, it had been over two years since the last time I had driven one, so that was exciting. First off, if you’ve never driven in Italy, be forewarned – they drive WAY TOO CLOSE. On the highway, you’re driving about 140 KPH (approximately 80 MPH). The car behind you is driving about 142 KPH and is so close that you can clearly hear them swearing at you even though there is no way for you to move over. I ended up driving in the middle lane a lot of the time.

The car rental agency rented me a GPS – imagine my surprise when I discovered it was a Tom Tom (do they still make those) and the current settings were in Portuguese. I ended up having to pull over to the side of the road and press random buttons to finally program it to speak English and then figure out how to use a Tom Tom.

Finally, figuring out the toll system was no picnic. Most of the toll stations on the highway are the equivalent of the self-checkout line in a store. You pull up, insert a ticket, and then pay. Sounds simple, but nothing was labeled and I inserted my ticket into every available slot as well as my debit card. One time, I used cash and the change was dispensed in Euro coins that bounced out of the collection bin. I had already spent way too much time at the machine and was surely annoying the cars that were stacking up behind me, so I left it and moved on.

I didn’t love Modena but a lot of that was probably influenced by the rainy weather and the fact that I was there on a weekend. Nearly everything shuts down on Sundays and it’s often difficult to find a place for lunch.

While there, I took a tour of a balsamic vinegar producer and learned all about the grapes used, the process employed to ferment the grape must, and the stringent rules that producers must follow. There was a tasting and the difference between authentic Modena-produced balsamic vinegar and run-of-the-mill balsamic you find in your local grocery store is astounding. I ended up purchasing three bottles: traditional balsamic, raspberry balsamic, and truffle balsamic (after my truffle hunt, I’ve become a fan).

After Modena, I traveled to Siena and enrolled in a few day trips. Above, you can see the beauty of Siena and the largest piazza in Europe. I have recently seen a photo of the piazza and, due to the lack of people walking on it, grass has started growing through the cracks of the pavers. Watch the video below and listen to the bells in one of the smaller piazzas.

One of the first tours I took was a Vespa tour of the Chianti hills of Tuscany. If you look very closely, you will note that I am not on a Vespa, however, a Vintage Fiat 500. Having never driven a Vespa before, the tour operators give you literally a two-minute lesson in a 20′ X 40′ parking lot with one of the operators running alongside you and screaming in your ear what to do. Naturally, I did not feel comfortable on the Vespa so I transitioned to the Vintage Fiat. When I think of “vintage”, I usually think of restored and, I don’t know, safe? These cars were anything but. My car stalled whenever we slowed down. At one point, one of the tour guides had to push the car to the top of a hill and pop the clutch to get it restarted. Another of the vehicles had its gas pedal fall off and the driver and passenger had to split up into the two other, barely-functioning vehicles. It was a nice day despite the Vespa/Fiat fiasco.

We stopped at Rocco di Castellina and had some free time to walk around. It’s a charming walled city full of character, incredible views. and interesting stone-covered walkways.

After leaving Rocco di Castellina, we meandered through the hills of Tuscany to a local Chianti Classico vineyard – Poggio Amorelli. I learned that there is a difference between what I thought of as Chianti and the Chianti Classico. The Classico is delicious with a ruby-red color and aromas of violets and cherries with an earthy spice. To ensure you are buying the correct type of Chianti, the Chianti Classico is marked by the DOCG, which stands for Denominazione di Origine Controllata e Garantita, or Denomination of Controlled Origin. The DOCG symbol is a black, young rooster (Gallo Nero) on the label.

We finished our day in Monteriggioni which is an impressive walled, Medieval town. The town was originally part of a castle which stood in this location since 1200 and whose towers can still be seen for miles across the Tuscan hills.

My next day trip took me to San Gimignano, another wine tasting at a vineyard, and back to Monteriggioni.

San Gimignano is a UNESCO World Heritage Site. It is a medieval walled-town with 14 towers visible from miles away. It also boasts the world’s best gelato and a cistern that dates from the 13th century. The day I was there, there was a market day and the streets were closed off to automotive traffic. The streets were overflowing with market stalls and pedestrians. As you walked down the street, there would suddenly be an opening and you would look out across the hills and valleys at breathtaking views.

At this day’s wine tasting, the vineyard paired their wines with Tuscan favorites: pasta, cheese, charcuterie, and. pastries.

The tour finished in Monteriggioni where I stopped at a local wine shop for a very sophisticated wine tasting. You purchased a card with a certain number of points programmed in. When you found a wine you wanted to taste, you would insert your card and the points would be deducted from your card. Different wine tastings had different point values. It was really very clever.

After nearly six weeks of travel, I wanted to relax for a few days before coming home and jumping back into normal life. I did some research and found a spa that I could go to for one day and a hotel that was within 20 minutes of the spa in Pitigliano. I thought it would be a short drive from Siena to Pitigliano but there was not a highway so I drove about four hours through hills, mountains, and valleys on switchback-filled roads. I was white-knuckled most of the time with my jaw firmly clenched. I drove through some areas that were very desolate and thought if I had driven off the road, people might not find me for months.

Once arriving, I discovered that, without a doubt, Pitigliano was the most majestic-looking town I encountered in six weeks. It sat high atop cliffs that were brightly illuminated in the evenings. I accidentally found myself across the gorge from the town – in reality, I couldn’t find parking in town and couldn’t turn around so I ended up driving out of town until I could somewhat safely make a U-turn. The town was picturesque with narrow pedestrian streets that made you feel like you were in an Anne Rice novel. There was a festival the night I was in town and kids were running all around and competing in some games in the square – at 11:00 at night! The hotel I stayed in had their own mini-spa which even had a salt cave.

I spent a day at the Saturnia Thermal Spa and it was not quite what I had expected. Coming from the United States, we are accustomed to (probably) stringent regulations on health and safety. There was a large thermal pool which was quite sulphuric. That was as expected, however, the mold growing on the side of the pool and floating throughout when it broke off was not expected. There were also two circulatory baths. One was a wading path where you walked from hot to cold to hot water to improve circulation. The other was two jacuzzis – one hot and one cold – and you alternated ten minutes in each pool. There was also hydro-massage and saunas and quiet spaces to sit and relax. I also had a problem finding the exit but left feeling as if my body had partially recovered from the thousand miles I must have walked in the previous six weeks. It was a fantastic way to end the trip.

As I prepared to leave Italy, I drove my car down along the Mediterranean Coast. I decided to stay by the airport rather than in the center of Rome as I didn’t want to deal with the train the next day. While it is convenient, I was done with dragging my suitcase up and down stairs and onto trains and trying to find a spot for the my suitcase. I stopped and ate a a quaint little beachside restaurant. It was the perfect ending to a memories for a lifetime trip.

In summary, my least favorite town was Bari and that had more to do with the lack of internet at my residence. If I hadn’t had an assignment due and so much trouble finding internet service, I’m sure I would have been delighted with it as well. It was a beautiful city, I just didn’t have a great experience.

My two favorite towns are Perugia (Umbria) and Pitigliano (Tuscany) and I can see myself returning to both.

Overall, I enjoyed Lake Garda, the largest lake in Italy. I can definitely picture myself spending time on the shores of the lake annually. The microclimate was perfect and the towns felt very comfortable.

My recommendations are what’s right for me. Take a trip for yourself and discover what you love most about Italy!