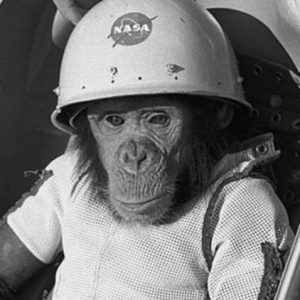 No Comments on Remembering Ham, the AstrochimpPosted in animals By Tammy WunschPosted on February 4, 2020June 20, 2020Tagged Expat Writer, Ham, i speak for paws, Save the Chimps, Tammy Expat Writer

On January 31, 1961, Ham became the first chimpanzee in space as part of the United States’ space program. Ham didn’t volunteer for the “honor”, nor do I believe did he feel any pride in his accomplishment.

Ham was kidnapped from Cameroon in 1957 and was held captive on a farm in Miami until the Air Force later purchased him. He was sent to Holloman Air Force Base where he and 40 other chimpanzees were forced to participate in grueling tests to determine which chimpanzee was best-suited for being launched into space. Ham became one of six chimpanzees to be considered for the launch. He scored well on his tests and his reaction times were faster than the other chimpanzees. Ham was a quick learner who knew that succeeding at a task would earn him a banana treat. The tests consisted of measuring the chimpanzees’ endurance to being confined for long periods in a chair and trained to operate levers in response to light cues.

Ham, though still only known as No. 65, was launched into sub-orbital space on this day in 1961. The flight experienced some issues, such as loss of pressure and a very rough splash-down. The capsule landed 130 miles from the target and began taking on water. It took the recovery ship several hours to reach No. 65. Amazingly, Ham survived with only a bruised nose. Photos of the recovery how No. 65 with an enormous grin which was interpreted as happiness. Chimps, however, only bare their teeth due to extreme fear and anxiety. When back on land, photographers asked for another photo of No. 65 in his “couch” – the seat he was strapped into in flight. Ham refused to sit in the couch, even when several men tried to force him.

Now that No. 65 had successfully completed the flight, NASA decided they that No. 65 could have a name. In an unsurprising lack of creativity, they named him an acronym for where he was imprisoned – Holloman Aerospace Medical Center.

He was then sent to be exploited at the National Zoo in Washington, D.C. for 17 years where he lived alone before being transferred to the North Carolina Zoo. At least he was able to live with other chimpanzees at the North Carolina Zoo. Ham died on January 18, 1983, at the age of 26. Space programs had been sending animals into space throughout the 1940s and 1950s. Beginning in 1948, the U.S. military launched V-2 rockets with rhesus monkeys as test subjects. Over three test flights, all three monkeys died. The first monkey suffocated in space and two subsequent monkeys died on impact. For the next 40 years, the Air Force chimpanzees and their descendants were used as biomedical research test subjects, space-related experimentation, disease research, toxicology experiments, experimental surgeries, and breeding.

When the Air Force was done experimenting with chimpanzees, they planned to euthanize their test subjects. Dr. Carole Noon had a vision of creating a sanctuary for the chimps that had been subjugated by the Air Force. Initially, the Air Force refused Dr. Noon’s offer to provide a home for the Air Force chimps until a lawsuit awarded custody of the chimps to her. Jon Stryker of the Arcus Foundation shared Dr. Noon’s vision and purchased 150 acres in Florida for a chimpanzee sanctuary. The Air Force chimps arrived in 2001 and were able to live out the rest of their lives in peace and tranquility, without fear of being exploited or used as test subjects.

Save the Chimps was founded for the Air Force chimps, though quickly grew when, in 2002, Dr. Noon rescued 266 chimpanzees from the Coulston Foundation in Alamogordo, NM. The chimps had been used as biomedical research test subjects and most lived alone in concrete cells. The Coulston Foundation had the worst record of any lab in history since the inception of the Animal Welfare Act.

Save the Chimps has rescued chimpanzees from many dire circumstances. Their residents include chimpanzees rescued from research labs, the entertainment industry, zoos, and former pets. Today, over 250 chimpanzees live on 12 man-made islands in chimpanzee family groups. They receive three meals a day, enrichment, medical care, and celebrate every holiday with parties on their islands. The chimpanzees also enjoy the love and affection of a dedicated staff of caregivers and volunteers.

Save the Chimps is one of my favorite animal sanctuaries. I volunteer at the sanctuary when I am able to travel to Florida and represent them at animal-related events around New England. It continuously confounds me that anyone could look into the eyes of a chimpanzee and still view them as a subject for any type of testing or experimentation. It is inhumane and beyond cruel.

“They have bravely served their country. They are heroes and veterans.” – Dr. Carol Noon

There are many ways you can support Save the Chimps:

Educate yourself and others about why you should never even consider a chimpanzee – or any wild animal – as a pet. It is our moral obligation to peak for those who have no voice.